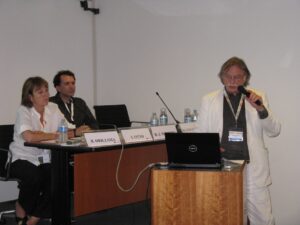 When proposing science debates as tools, opportunities and even tasks for science journalists, a colleague came up and said scoffingly: »It’s still only PR.«

He was not wrong – considering the currently fashionable science debates.But that is the point: we need new formats, we need debates with a journalistic approach, we need to fill the science democracy gap.

Indeed, currently most public debates around science and research topics are PR events, sandboxes for citizens to play democracy. They can be seen as an enhancement of traditional methods to increase public understanding of science and technology or humanities, PUST or PUSH.

Admittedly, these attempts did add something to public knowledge and probably even to literacy. But they had their time.

Three or four decades ago scientific and technological research became recognised as driving forces for commercial exploitation. Following this rationale, debates were welcomed as persuading tools. Debates are not only suited to increase public awareness of science and technology, but also to gain acceptance for new research programs, investments and undertakings, whether they were socially relevant, intellectually interesting, or not.

But while citizens gained new knowledge they also became more critical against innovations. Those who learned to read the bible could also read the essays of heretics. Debates became suitable as buffer against criticism. They give citizens the feeling of being involved.

But they are never really involved. They are invited to debate events after decisions are made, after projects are approved and funded, and after contracts and investments are secured. Participants get biased briefings from the decision makers through their communicators or from the participants of freshly started projects. As a result they are only allowed to shape a bit, but not to change or even stop developments. In intermediate and final reports of projects it is considered a success if events for improving the relationship between science and society lead to an unanimous support of the project.

Nothing against science communicators. Many of them, especially those with a history in journalism, do good jobs in educating people and in holding back enthusiastic scientists trying to overhype their research contributions. We need them like we need the press officers. But the border between communication and marketing is quite unassigned and sometimes the distinction between science communication and science marketing fades.

The other side of the coin, the critical part, may be delegated to Non Governmental Organisations NGOs oder Civil Society Organisations CSOs. But the briefings they deliver are also biased. This may result in oppositional, if not conflictive groups, each thinking to possess the ultimate truth.

As a result, nothing goes. In case conflicts become serious, decisions are either postponed until it is too late, as we just learned from the Warsaw Climate Summit, or precedents are created by those who have the power and the money, ignoring social movements and civic debates.

Thus there is a need for other debates.

Debates on science, technology and innovations are needed which can lead to changing things, where antagonists exchange their arguments in front of the public, and which are a forum for »critical questioning in the public sphere«, the motto of the last World Conference of Science Journalists 2013 in Helsinki.

New debate formats with real participation are an opportunity for science journalists to apply their professional expertise. Journalists try to stay impartial, try to balance and weigh facts and arguments. In their daily jobs in TV, radio, papers or digital pages they are in fact moderators trying to explore not only the facts behind the news but also the disposition and concerns of their audiences. In a way call-in TV or radio programs try to realise this attempt already. Thus nothing speaks against the appearance of science journalists as moderators and critical inquirers in public fora.

Journalists are able to choose their topics much more freely than science advocators or critics. They can and must see the wider philosophical and social frame. Question like »Who am I?« or »What holds the world together?« are still topics.

Many current science debates miss to answer such basic questions.

It might be interesting to learn and discuss the importance of nanotechnology breakthroughs for electric car batteries or for curing diseases. But people want often answers to much simpler questions: »How can I come from point A to B?« or »Why did I become ill?«

The flow of money is a hot topic avoided by science communicators: »Who benefits from delivering expensive research equipment?« Where big money is in the game, corruption is lurking at the doorstep. And what about those scientists deriving a political mission from their specialised expertise?

Also ethical questions can make an agenda set by journalists like the bloody side of ever more sophisticated innovations based on the exploitation of humans and bedrocks elsewhere.

Debates getting to the bottom of things have all ingredients needed for good narratives. There are opponents, there is the public, there is tension and thrill, and there are for sure surprising and often unexpected insights in new research results, innovations or ideas. Enough stuff for stories.

Although science debates initiated and lead by journalists can add to the role of the media as a power in democratic societies, they will remain tools for transparency, not necessarily for change. Journalists can and should set agendas. Decisions are made elsewhere. In democracies as we know them not even citizens can for example change the way secret services work, but their structures can be made a bit more transparent making citizens aware of the shadow regimes.

Concentrating only on the angle of natural and engineering sciences is too narrow. There is a wealth of untapped or often ignored knowledge in social sciences and humanities. They are invaluable in order to add different views and to put things into the real societal framework.

It should not be forgotten that even scientists and engineers are citizens who have insights and opinions which are not in line with their peers and more often not in line with the way scientific and technological research is steered and controlled. Science debates can and should give even them a voice.

It should also not be forgotten that science journalists deal with science and technology because they like science and because they have some background knowledge to understand it. In a way they are also advocates. But in their self-perception as journalists they should stay, contrary to communicators, critical inquirers and researchers. Only this way they can contribute to their role as journalists promoting a new debate culture and help citizens and researchers to widen intellectual and knowledge angles.

Although the blueprint of science debates, the US one, was created by just a handful of journalists, artists, authors and movie makers, lead by co-founder Shawn Otto, in Europe the associations of science journalists can do a lot to nurture, patronise or even perform science debates in ordeer to fill the »science democracy gap«, as Otto phrased it.

After the German TELI founded the »Wissenschaftsdebatte.de« (science debate) in 2009, the Estonian association and EUSJA picked up the idea after it was promoted during the EuroScience Open Forum ESOF 2010 in Turin. After the format was practised during ESOF 2012 in Dublin and promoted globally during the World Conference of Science Journalists WCSJ 2013 in Helsinki, the interest in performing science debate formats in other countries increased. The idea came up to create an internet forum or a message board for networking and sharing experiences, which has yet to be set up.

As a result, EUSJA was even lucky to negotiate the idea with the European Commission resulting in getting the format funded in the frame of the NanoDiode project. Also TELI, which debate became somewhat silent due to lack of money and time for voluntary work, succeeded recently to get considerable financial support from a private foundation.

Let’s go on and explore one of the new roads for science journalists in this changing world.

There are two comments on the article on the home page of EUSJA on which I replied in detail. Please have a look at my replies and continue the conversation: